“Our focus is caring for your oral health. Our goal is to play a positive role in your

daily routine to improve not only your teeth and gums, but most of all your SMILE.”

My name is Max Babiner. I am a 3rd generation dentist, author, and creator of the Triple Bristle sonic toothbrush. My passion is oral care as it has a huge impact on a person’s overall health. This is the story of Triple Bristle’s birth, development and now growth into a solid brand with ever increasing sales as people come to love our brush. Today our brand is sold by Amazon, Walmart, Dentists, Hygienists and other retailers and internet websites. What an amazing journey!

Before going to dental school, I ran an online store that sold electric toothbrushes. Part of my job was ordering and testing a variety of toothbrushes from all over the world. One that caught my attention was the care-me three sided toothbrush which had a great idea – an electric 3 sided toothbrush. The problem was that it was poorly designed. The bristles were made out of plastic and the motion was back and forth. I started searching for a sonic version of this and found that one didn’t exist. 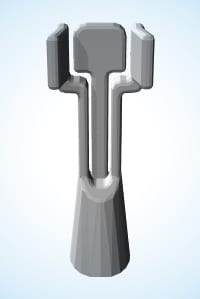 The more I learned the more a 3 sided brush head design made more and more sense. After graduating, I began to search for a 3 sided sonic toothbrush. There still wasn’t one so I did a patent search and nothing seemed to provide what I was looking for.

I reached out to several manufacturing facilities and they all told me the concept was impossible. Every factory that I contacted was sure it couldn’t be done. Several freelance engineers had the same comments – it’s impossible. Then I met one talented engineer that said it would be no problem. This was no ordinary engineer. He was a rising star in the German engineering community who eventually ended up as an R&D manager in a major German manufacturing facility. He quickly came up with a design and after several tweaks, we had our original design – a bee shaped brush head that would “come alive” when the sonic handle is turned on.

In order to figure out which shape to use, we used 3d Printing. The initial design was boring and medical looking. To make it more playful we decided to make it the shape of an insect – a bee came to mind.

The first design was a bit plain and had no personality.

To give the brush head more personality, we made it in the shape of a bee. It was going to be called the “Bee Brush.” Then we decided to call it “B Brush” which was then changed to “Zuby” when search showed that B Brush was already in use. Zuby didn’t stick because it was offensive in Arabic so finally, we landed on Triple Bristle.

Once we figured out the head shape, we had to see which bristle diameter was ideal. Bristle diameter is tricky because if it’s too soft, it won’t remove stains but if it’s too hard it will damage gums and enamel. It has to be soft enough to be gentle but hard enough to adequately clean teeth and gums. It took about 5 dentists and a few batches of prototypes to get it right. Then after several patients used it, we changed it up again based on what we were seeing. The bristle diameter now is perfect. The spacing between bristles is also something that was diligently discussed. The current spacing brushes both larger teeth (like upper and lower back teeth) as well as thinner teeth like the front upper and lower properly.

Once we started trying to mass produce the product, several companies were contacted. We went through a few. Some had poor workmanship and bristles and others didn’t have ideal engineering. The original engineer created a great design but was not well versed in toothbrush mass production. I found an engineer out of the Philippines who had connections with manufacturing facilities. One of the issues we continually ran into was that the brush head would come apart. We originally used a snap connection that didn’t hold well when the brush was put on top of the teeth. This manufacturing engineer gave me the idea to ultrasonically weld the pieces of the brush head together. This solved the issue of the brush head pieces coming apart. At that point, we engineered 5000 units.

Originally, we wanted to name the toothbrush the “Bee Brush” because the shape of the head was meant to replicate a bee shape. To make it shorter, we decided to make it the “B Brush” The B was meant to stand for Babiner. I wanted to commemorate my grandmother who was the first dentist in the family.

After a trademark search, it turned out “B Brush” was already being used so I chose a different name. Zuby or the word for teeth in Russian seemed to make sense. It was an interesting and easy to remember the name. After getting plenty of feedback, it turned out that Zuby is actually a profane word in Arabic so I went back to the drawing board. I used several surveys and a lot of feedback. The name that stuck was Triple Bristle.

All of this created several packaging issues. The original 1000 units ordered had the “B Brush” logo on it. After it was changed to Zuby, a sticker was used to cover up “B Brush” on the package. Then it was changed to Triple Bristle. Rather than putting on a sticker onto another sticker, an expert packaging company was hired to create this updated packaging with a clear window that highlights the unique look and feel of the brush head. 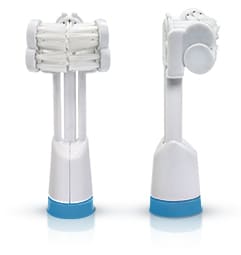 When I was beginning the concept, I applied for a provisional patent. The ideas was that while I was developing the concept, I would have a placeholder in case the idea gained traction and I wanted to protect it. During the initial patent search, a very similar patent was found out of Germany. The lawyer warned me that the chance of getting a patent awarded was low because someone already filed in Germany. It wasn’t clear whether he filed in the U.S. By the time it was time to apply for a patent, I knew that it was a solid concept that people like. Several dentists and a variety of friends had used the brush for over a year and all gave me positive feedback.

Even though the risk was high, we still went ahead and filed for a patent. Initially, it was denied. We went through several re-writes and working on the language. Then the lawyer that initially handled the patent gave it to his associate. That’s when I changed attorneys. The new attorney had experience in the patent office and was able to get the patent approved. 2 patents and 40 claims. 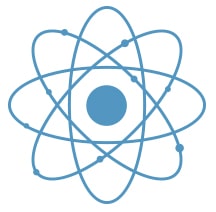 Most people on average brush their teeth for 45 seconds. That makes the standard toothbrush unlikely to provide adequate hygiene. However, instead of remaking the toothbrush most companies just add small design changes that aren’t really significant. One of the more significant developments with brushing technology is adding electrical motion – either sonic or rotating or oscillating.

However, most people habitually miss the same spots. Statistically, people spend a lot of time on the outside portions of their teeth, a bit of time on the top and very little to none on the portion near the tongue and palate.

There are already studies done by manufacturers of other 3 sided toothbrushes that demonstrate the increased effectiveness of toothbrushes that brush all 3 sides at once. These studies include the dentrust toothbrush, the 30 second brush and the Evolve manual toothbrush. 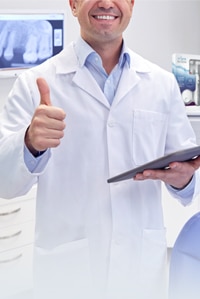 Brush all teeth perfectly in the time that people naturally spend on brushing teeth. In other words, the toothbrush is being adapted to people rather than having people trying to adapt to the brush.

The sonic vibrations help to create cleansing micro bubbles that clean much deeper and better than an ordinary toothbrush.

Takes all the thinking out of brushing properly!